FUNDEFIR (Rural Finance Foundation) is a Venezuelan foundation, which has been working for 14 years developing a methodology to provide financial services to communities and individuals excluded from the formal financial system. FUNDEFIR’s model, called Bankomunales, is based on the exclusive use of funds from members of the community, as a source of funding.

The old informal system of communal savings, with more benefits

In many communities in Latin America and Africa, the problem is not so much the lack of income than its irregularity. To solve this problem, informal mechanisms have been traditionally used in these communities to meet the needs of credit and savings: each person in the group gives money to a communal fund, from which anyone can ask for a loan if needed, and return the money according to pre-established conditions.

The Bankomunales’ system is based on this old common fund mechanism, but the novelty is that local funds are not only” savings deposits”, but “micro investments”, through which participants buy shares of the organization and benefit from a return on investment. The new model not only allows access to financial services, but also provides financial education and community organization.

Learning from the failures in the traditional microcredit system 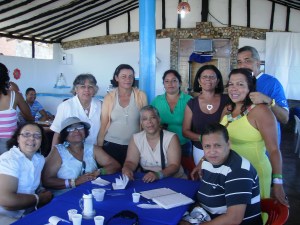 The system of microcredits granted by banks is being criticized today by some analysts as well as by the Prime minister of Bangladesh, Sheik Hasina Wazed, who consider that most borrowers do not appear to be climbing out of poverty, and that a sizable minority is getting trapped in a spiral of debt. With the Bankomunales system, the benefits from the microcredits are reverted to the community. “The community members are the owners of the money so they get double benefit: the use they made of it and the interest. And this causes a strong change of mentality” Raydán Solomon says, the social entrepreneur at the front of this initiative (1).

“Muhammad Yunnus taught the world that the poor people could be financed. We have shown that they can be self-financed.” he adds, defining his project.

A model for international experiment.

Currently, there are about two hundred Bankomunales in eleven states of Venezuela. Repayment rates are of 99% and the success of the model has led to its export to five countries on three continents: Spain, Senegal, Brazil, Bolivia, Colombia.

In this world millions of people give daily, through their actions, an example of courage, solidarity and creativity. These examples are contagious and IOSPHERA's objective is to transmit them.